Bruce’s story about [former NBA star] Antoine Walker unapologetically spending a total of $28,000 so he could keep two identical shoe collections in two homes.
– Pablo S. Torre on one of the scenes that did not make the final cut of “Friedman’s Shoes”

Throughout the late 1980s and ’90s, owner Bruce Teilhaber tended to the likes of Charles Barkley, Shaquille O’Neal, Magic Johnson and other plus-sized athletes seeking luxury footwear in hard-to-find dimensions. Recognizing the unique nature of this story, ESPN The Magazine and ESPN.com senior writer Pablo Torre later pitched the idea to ESPN Films. The result: He wrote and produced what soon became a 30 for 30 Short, “Friedman’s Shoes,” directed by Danny Lee. The film, published this week on ESPN.com, will be showcased Feb. 12 on “Friday Night Movie Night” during the 6 p.m. ET hour of SportsCenter.

Front Row caught up with Torre – “I’m 5-feet, 10-inches without shoes, to use NBA draft parlance,” he said – during a busy week leading up to NBA All-Star Weekend.

What’s your schedule like this week with NBA All-Star Weekend, your film premiering on ESPN.com and SportsCenter, etc.?

I’m lucky to have this weird, liberal-arts-type dynamic with my job. By Saturday, I’ll have taped two podcasts, premiered a short film, done Around the Horn, published an ESPN The Magazine feature on [Golden State Warriors guard] Steph Curry, done SportsCenter, reported some of my next article, and lost several fingers due to frostbite in Toronto.

If you could produce the “director’s cut” of this short, what deleted scenes would be added?

Two things, both of which would have been amazing: 1) [former NBA and Georgia Tech star] Dennis Scott’s monologue about “Hotlanta,” which detailed what fashion was like “before the 2000s, and all the hating came in”; 2) Bruce’s story about [former NBA star] Antoine Walker unapologetically spending a total of $28,000 so he could keep two identical shoe collections in two homes.

How did you land interviews for this?

Lots of calls and e-mails. And with Shaq, we knew he was a beloved customer. But when he showed up – we interviewed him at the store after Dennis — we were told we’d have 15 minutes, max. Those 15 minutes, of course, turned into reminiscing for the better part of an afternoon. We all wound up ordering lunch.

What was the largest shoe you encountered?

I recall holding a size-20 loafer that might have saved me were I floating out at sea.

Everyone’s shoe size is documented in the film. What’s yours? What’s your go-to shoe? 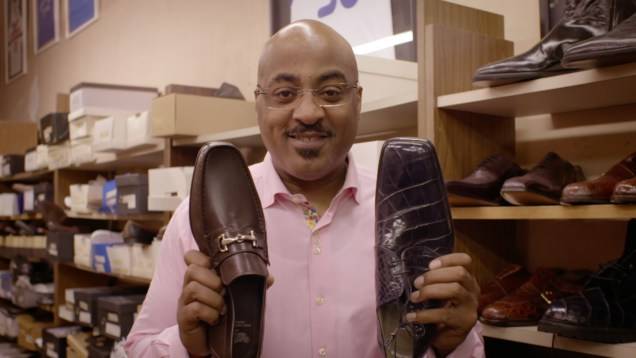