Tall Orders Are No Problem

Bruce Teilhaber is sitting in what he calls his "Exotic Skins Room."

It is actually one of the smallest rooms in Friedman's Shoes, his Mitchell Street store in downtown Atlanta, but it packs perhaps the biggest punch.

"The players love this room," says Teilhaber, smiling as he looks around the room lined with ostrich, alligator, snake and lizard skinned shoes.

Shoes in this room run up to $850 but that's not a problem for the "players," Teilhaber's customers who just happen to be some of the biggest --- and best paid --- professional football, baseball and basketball stars in the world.

With customers like his, carefully cultivated since the early 1970s when he saw a niche for big men, Teilhaber has had his share of nice daily receipts. He did quite well last week, for instance, when he estimates at least 60 percent of the Oakland Raiders and Tampa Bay Buccaneers bought shoes for Super Bowl functions. But when the National Basketball Association brings its All-Star game to Atlanta next week, well, that's Teilhaber's dream come true.

"The best week I ever had was during the [2000] Super Bowl and there was ice on the ground," Teilhaber says. "It will be even better for the All-Star game." 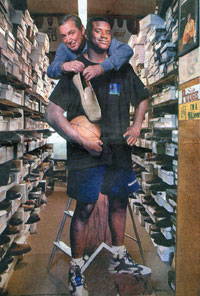 See why he is smiling?

"Let me show you something," Teilhaber says with a gleam in his eye as he ambles his way up the creaky stairs and over the uneven floors of his sprawling 20,000-square-foot, three-story shop filled with shoes and the faint, sweet smell of new leather.

An associate, Rose Duckett, reaches over 15 boxes of identical basketball shoes ready to be shipped out to San Antonio Spur Malik Rose and hands Teilhaber a white box the size of a baby's car seat.

He then pulls out the biggest gray leather shoe anyone is ever likely to see.

"This is what the Big Man is wearing for his party Friday night," says Teilhaber.

The "Big Man" is Shaquille O'Neal and what he will be wearing is a size 22.

Welcome to Teilhaber's world --- a store decorated with photos of customers like Tommy Lasorda and Patrick Ewing and with an old gray flannel Johnny Bench Cincinnati Reds jersey. Articles from publications around the country are framed, as well as a picture of Oprah Winfrey, from when the store was featured on her TV show.

When NBA players are looking for shoes, they call Teilhaber, whose name is nearly as important in NBA circles as league commissioner David Stern's. Almost without fail, Teilhaber can fill any order .

He's been catering to professional athletes for more than 30 years, since he bought the store from his father-in-law, Phillip Friedman. He soon realized that if he could talk manufacturers into making bigger shoes, he'd fill a hole in the marketplace.

"Every year, my big days were when the 49ers, Rams and Saints came to town," Teilhaber says.

"He wanted a size 14 and I didn't have it," Teilhaber recalls. "I vowed that that would never happen again."

With his own designs and patterns as examples, Teilhaber asked manufacturers to make bigger shoes.

"They thought I was crazy," says Teilhaber, a New Yorker who hasn't shed his Brooklyn persona, complete with a big gold chain around his neck and explanations followed by "knowhatI'msayin?"

"We were only going up to size 13 and he said you need to do the over-sizes. Now it is a significant portion of our business," says Grashin.

"If you know Bruce and he says you got to do it, [first] you question him," the shoemaker says. "Then you do it."

According to Randy Teilhaber, one of four sons in the business and a principal designer of many of the shoes, NBA players account for an estimated 20 percent of Friedman's sales. About 35 percent of all sales are of shoes larger than a size 14. Sizes in the store run up to 22. Each shoe comes in at least 11 colors, from black to olive to red. Prices are from $79 to $850. Special orders can run into the thousands.

"A guy comes in with a $2,000 suit on, he doesn't want a hundred- dollar pair of shoes," says Randy Teilhaber. "We get guys who come in here with six suits, and we can match every one of them."

Scott Cates, the mid-Atlantic account representative for Mezlan Shoes, which provides Friedman's line of Paolo De Marco, estimates that fewer than 1 percent of the better retailers carry shoes above a size 13.

"Bruce has taken his passion and rolled it over to how can he help these guys," says Cates. "He helps people find footwear that they can't find. How can you compete with that?"

Sought by the pros

On a recent Friday, Sacramento Kings reserve forward Lawrence Funderburke limps into the store wearing a cast on his left leg. But Achilles tendinitis doesn't stop him from buying four pairs of shoes.

"I should be able to wear shoes in a few weeks," Funderburke says. "I had to stop by. This is the only place where I buy shoes."

Murray Teilhaber, who has worked for his brother for 31 years, says they have been able to keep players and customers coming back because no matter how big and famous Friedman's is, it is still a family-run business. "It's the personal touch that everybody gets," he says.

"Hey Marty," Teilhaber bellows. "I'm forgetting. Who is that guy you got with the 22s?"

"Jerome James with the Sonics," answered salesman Marty Atkins. "I've sold him about 18 pairs of shoes over the last month."

Later that evening after the Hawks outscore the Kings in Philips Arena, players in both locker rooms perk up when the subject of Friedman's comes up.

"They take care of you," says Kings All-Star Chris Webber. "And Bruce is definitely a good guy. Now tell him to give me some free shoes."

"The variety of shoes over 13 makes it unique all in itself," volunteers Kings guard Jim Jackson, who wears a size 14 1/2.

"If I go to the mall I tell them to bring out all the 15s. They line them up and I end up only liking two pair," says the Hawks' Glenn Robinson. "If I told Bruce to line up all the 15s, he would have a line outside the door."

It's lunchtime and Randy Teilhaber picks up three eggs for his father from the corner store. Teilhaber doesn't open or close the store anymore, leaving that to his sons. But he continues to come by every day and schmooze with the customers.

The funny thing, he says, is that "the last sport we got was basketball and now that is our lifeline. I went after these guys by getting the sizes they needed, getting the word out, picking them up from the hotel. If they call me at midnight, I am here with the door open."

"There is something mystic about the place," says Funderburke of the Kings. "You walk through the place and you see all the pictures. Moses Malone, Dominique. . . . It is the mecca." Photo Bruce Teilhaber climbs over a life-size cutout of the Lakers' Shaquille O'Neal, one of Teilhaber's biggest customers at Friedman's Shoes. Teilhaber is well-known in pro athletes' circles. / RICH ADDICKS / Staff