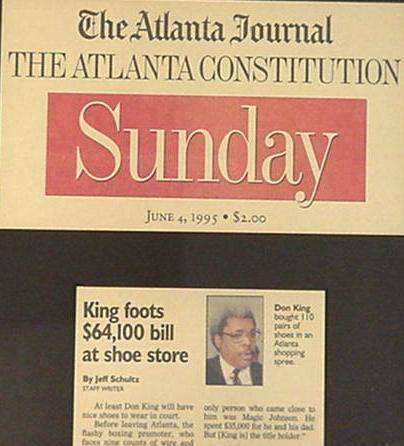 At least Don King will have nice shoes to wear in court.

Before leaving Atlanta, the flashy boxing promoter, who faces nine counts of wire and insurance fraud in New York, stopped by renowned Friedman's shoes store to shop for himself, his son and his top client, Mike Tyson. Two hours later, King left with a receipt for 110 pairs of shoes, amounting to $64,100. Tax included.

"That's a record," said store manager Brett Teilhaber. "The only person who came close to him was Magic Johnson. He spent $35,000 for he and his dad. But [King is] the title holder."

King's most expensive purchase was an $850 pair of alligator loafers.

He was here for the just-concluded IBF convention but never attended the general session.